The powerful combination of spirituality and travel has been a means of transcendence since ancient times. In fact, the great religions of the world still hold uphold the ideal of pilgrimage to sacred places as a supreme rite of passage.

“Following ancient footsteps, today’s pilgrims travel, not as tourists, but as spiritual seekers,” explains David Souden, author of Pilgrimage: Twenty Journeys to Inspire the Soul. “Often they follow traditional routes, perform rituals and encounter holy ground and sacred architecture along the way. Their reasons are as varied as the sites themselves. Many seek religious enlightenment or spiritual transformation. Others hope for miraculous healing from disease or affliction. Still others yearn for personal peace or a heightened feeling of community. Religious or secular, joyous or contemplative, they share a sense that their destination holds a symbolic meaning far beyond its literal surroundings.”

From Christianity to Confucianism, Voodoo to Native American culture, here’s a look at eight sacred pilgrimages for major faiths around the globe.

Mecca and the Hajj, Saudi Arabia

“In English, the very word ‘mecca’ has come to mean ‘something to aspire to,’ ‘a goal’—a dream to be fulfilled,” notes Souden. “Mecca is a great deal more than a dream for fulfillment. It is a place of fulfillment, a sacred space to which only the faithful may be admitted.”

The center of Islam and the birthplace of the Prophet Muhammad, Mecca is the place toward which Muslims bow to pray to Allah five times a day. Mecca is the destination of the Hajj pilgrimage—the ultimate act of worship to Allah—and the focus of their worship is the Great Mosque at its center. As it has been for more than 1,400 years, all Muslims who are financially and physically able are obligated to make the Hajj at least once in their lifetime.

Their routes converge just outside of Mecca, at checkpoints marking the borders of the Sacred Territory, which is where the actual Hajj begins. Over the next few days, the pilgrims will perform several rites, each with its own special meaning and significance, that include: simple clothing to mark unity among all pilgrims; a rite of arrival to a sacred land; a circular, then linear ceremony of mobile prayer; an exodus from an urban to a remote existence; a spiritual camping trip among the dunes; an all-day collective gathering and all-night vigil; a casting out of temptation; a symbolic sacrifice; a three-day feast; and a final circular round of farewell prayer.

An estimated one million Muslims embark on the pilgrimage to Mecca every year from all corners of the globe, making it a kind of unofficial United Nations general assembly—a chance for each to unite, represent his homeland and check the pulse of Islam throughout the world.

Bodh Gaya is the place of Buddha’s attainment of Enlightenment and the most important of the four Buddhist pilgrimage sites related to the life of Gautama Buddha—the other three being Lumbini (his birthplace), Sarnath (site of first teachings) and Kushinagar (where he passed away). These four sacred places are known as the Caturmahapratiharya, or “the Four Great Wonders,” and have attracted sages, yogis and pilgrims since Buddha’s own lifetime.

The story goes that after six futile years of searching for the ultimate meaning of life, Indian Prince Siddhartha Gautama sat cross-legged under a Pipal tree and entered into deep meditation. During the course of the night, he attained enlightenment (Nirvana) and hence became the Buddha (the Enlightened or Awakened One).

This Pipal tree, a species of fig, later became known as the Bodhi tree. Buddha’s followers recognized the tree as sacred and it was officially revered by the first great Indian Buddhist Emperor Asoka. Though repeatedly destroyed by fanatics, the Pipal tree now at the site is purportedly descended from the original Bodhi Tree. Pilgrims customarily tie scarves to its branches, lay cut flowers and small lamps around its base and burn incense. Nearby is the vajrasana, or Diamond Throne, a red sandstone slab that, according to legend, marks the exact location of the Buddha’s meditation. For Buddhists, this spot is the center of the universe. 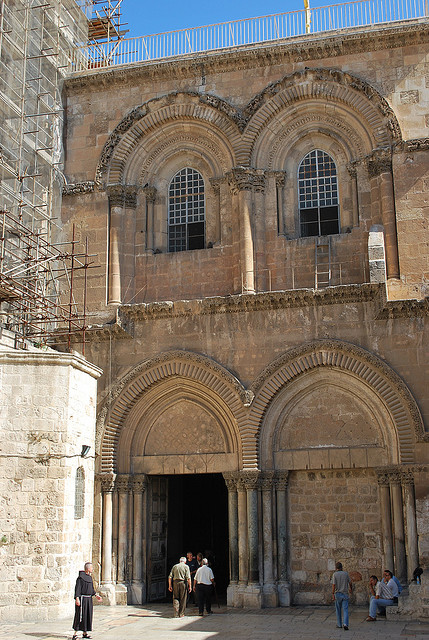 Church of the Holy Sepulcher, Jerusalem

The Church of the Holy Sepulcher (also called the Church of the Resurrection) is a Christian church located within the walled Old City of Jerusalem. The ground on which the church sits is venerated by most Christians as Golgotha, or the Hill of Cavalry, the hillside site of the crucifixion of Jesus, as well as his burial tomb.

Originally built by the mother of Emperor Constantine in 330 A.D., the Church of the Holy Sepulcher also holds the last (14th) station of the cross along the Via Dolorosa. In the middle of the church under the dome is a small building called the Edicule, which is believed to be the burial and resurrection site of Jesus. The 13th station of the Cross can also be seen here, on which Jesus’ body was supposedly laid out to be anointed.

The site’s authenticity is still the subject of much debate—the Bible states that these events took place outside of the walls—but the site has remained an important pilgrimage destination for Christians since the mid-4th century.

The Western Wall (or “Wailing Wall,” as it’s more commonly known) is the only remaining part of the original temple of King Solomon and the holiest place of pilgrimage and prayer for those of the Jewish faith. During the almost 2,000 years of the Jewish exile and dispersion from Israel, many wars have been fought over Jerusalem and the city has been destroyed and rebuilt no less than nine times. However, despite all attempts at destruction, the Western Wall has remained intact, now held by the Jewish people as a representation of their endurance and indestructibility.

Because the wall now forms part of a larger wall that surrounds the Muslim Dome of the Rock and Al-Aqsa Mosque, Jews and Arabs have frequently disputed control of the wall and rights of access to it. The conflict became particularly heated when the Israeli government took full control of the Old City in the wake of the Six Day War of June 1967.

The term “Wailing Wall” was coined by European travelers who witnessed the mournful vigils of pious Jews there. Visitors to the wall have long followed the practice of wedging small slips of paper, upon which prayers and petitions are written, into the cracks between the stones.  As the Temple was in ancient times, the Western Wall is an important place of pilgrimage during the three major festivals of the Jewish religious year: Pessah (Passover), Shavuot (Pentecost) and Sukkot (Tabernacles).

Benares and the River Ganges, India
The most famous center of pilgrimage for Hindus is the city of Benares (or Varanasi), one of the oldest living cities in the world, situated on the banks of the sacred river Ganges. Mark Twain, who was especially enamored with the legend and sanctity of Banares, once wrote that “Benares is older than history, older than tradition, older even than legend and looks twice as old as all of them put together.”

Pilgrimage is first and foremost a religious discipline—one of the five duties of all Hindus. Pilgrimage is a symbol of life itself, the journey of the seeker to spiritual places—a trek mirroring his journey through life’s experience in fulfillment of dharma and the search for a higher truth. To Hindus, life’s ultimate goal is moksha, enlightenment and liberation from the endless cycle of reincarnation.

In the world’s largest congregation of religious pilgrims, millions of Hindu worshippers will take a dip in the Ganges River to wash away their sins. For two days, the holiest of the four-month Kumbh Mela festival held every 12 years, the river is believed to turn into purifying nectar, allowing the faithful to cleanse their souls as they bathe. The bodies and ashes of loved ones are also brought to be buried in the Ganges during this time to ensure moksha for the deceased. According to the Guinness Book of World Records, the Kumbh Mela on February 6, 1989 attracted fifteen million pilgrims—the “greatest recorded number of human beings assembled with a common purpose in history.”

Confucian temple, Qufu, China
There are many temples in China that honor Confucius, but the largest and most important is the one at Qufu, his birthplace. It was here that China’s greatest philosopher developed the five virtues that formed the bedrock of Confucianism: benevolence, propriety, trustworthiness, wisdom and righteousness.

Built in 478 B.C. as a commemoration to the life of Confucius, the temple has been destroyed and reconstructed over the centuries. The cemetery contains Confucius’ tomb and the remains of 100,000 of his Kong family descendants. The original, modest house of Confucius’ childhood later developed into a gigantic aristocratic residence, of which 152 buildings still stand. The Qufu complex of monuments has retained its outstanding artistic and historic character due to the devotion of successive Chinese emperors for more than 2,000 years and has become the epicenter of pilgrimage and study for devotees of Confucianism.

Every July for the past 150 years, Haitians have made the journey from around the world to the Saut d’Eau waterfall, 60 miles north of Port-au-Prince. It is one of the top pilgrimages of Haiti’s Voodoo and Catholic religions. The three-day holiday honors Our Lady of Mount Carmel, the patron saint of Ville Bonheur (Happy Village), and Erzuli Dantor, the goddess of love and the Voodoo (or “Vodou” in Creole) equivalent of the Virgin Mary.

The journey to Saut D’Eau can take days on foot, as the treacherous road into the mountains is gouged with deep craters. Although some ride on horses or donkeys (or all-terrain vehicles), most walk the final four miles crawling up steep cliffs and crossing caverns filled with waist-high briny water.

The rituals begin at the 100-foot waterfalls at Saut d’Eau, where the pilgrims submerge and bathe in the waters, leaving their old clothes behind. Then priests and priestesses are consulted with for guidance, while others join in drumming and dancing, and make offerings and prayers at the tiny church nearby. As one pilgrim described it, “Saut d’Eau is a lot like Mecca to Muslims. No matter how much it costs, no matter how long it takes, if you serve the spirits you need to make the pilgrimage at least once.” 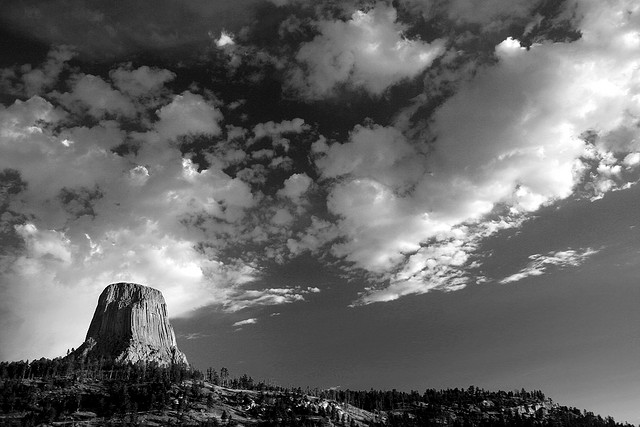 The Black Hills are the oldest mountains in the world and sacred to the Lakota Sioux tribe as their place of creation. Located at the geographic heart of former Lakota territory, young warriors would journey into the Black Hills as a rite of passage into manhood and its hot mineral springs were used by tribe members for healing purposes. Both male and female Lakota embark on pilgrimages into the Black Hills for vision quests, an intense ritual that involves fasting, sweating (in sweat lodges) and solitude to regain clarity of purpose, to give thanks, to ask for spiritual guidance, or to pray in solitude.

Devils Tower, in northeastern Wyoming near the Black Hills, is also a location of great spiritual significance for the Lakota people. In June, important pipe ceremonies, sun dances and vision quests connected to the sacred summer solstice are still held nearby. Lakota elder Johnson Holy Rock says: “If a man was starving, he was poor in spirit and in body, and he went into the Black Hills, the next spring he would come out, his life and body would be renewed. So, to our grandfathers, the Black Hills was the center of life, and those areas all around it were considered sacred, and were kept in the light of reverence.”